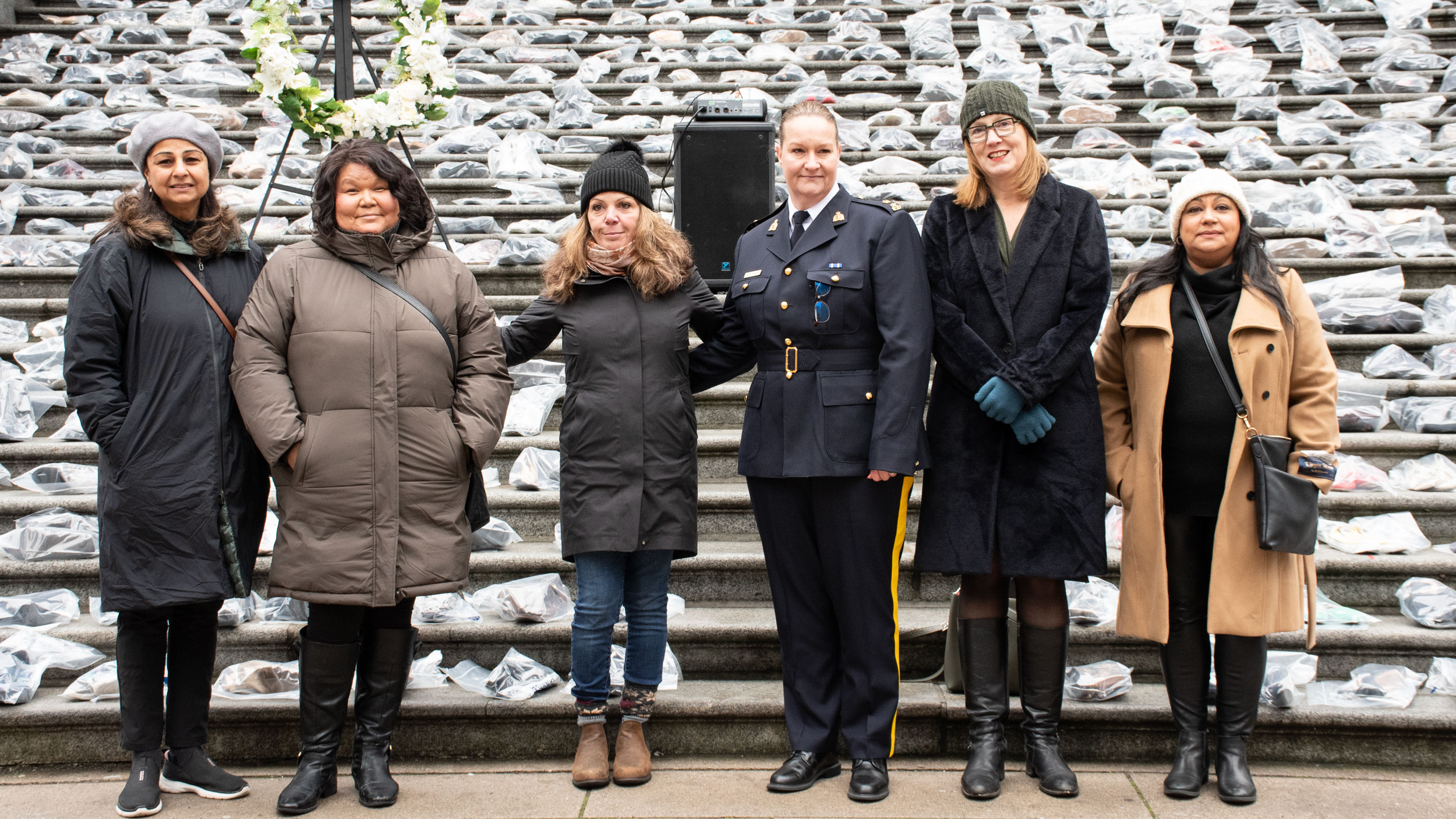 On December 6, the United Food and Commercial Workers Local 247 (UFCW 247) hosted their 18th annual National Day of Remembrance and Action on Violence Against Women Shoe Memorial at the Vancouver Art Gallery. December 6 is part of the 16 Days of Activism that began on November 25 and end on December 10.

Speakers at the memorial included Christine Wilson, Director of Advocacy for Indigenous Women at the Downtown Eastside Women’s Centre; Jasmine Bhambra, local realtor and community volunteer whose sister Manjit Panghali, was a victim of domestic violence and murdered by her husband in 2006; Brenda Bailey, MLA, Vancouver-False Creek (and now the provincial minister for Jobs, Economic Development and Innovation); Raina Siou of the RCMP; and EVA BC’s executive director, Ninu Kang.

The speakers remembered the 14 women killed in Montreal on this date in 1989 in an act of hatred, and reflected on what still needs to change. The steps they stood on were covered in a display of shoes and boots packaged in plastic bags and labelled with the names of mothers, daughters, sisters, or friends who have lost their lives because of gender-based violence.

Christine Wilson also named the women from Crane River Nation: Rebecca Contois, Morgan Harris, Marcedes Myran and Buffalo Woman, who were all murdered by the same man earlier this year in Winnipeg. She called on all levels of government and citizens of Canada, “to take urgent meaningful action to address the racist and misogynist violence.”

Jasmine Bhambra shared her story and emphasized that “…nobody is born a killer. Healthy men do not commit violence.” [but she noted] “…we need to identify the cracks in the system and make sure that no one falls through them.”

Raina Siou shared what the RCMP is doing to help improve the response to and outcomes of gender-based violence, including their involvement and work on high-risk cases with the Interagency Case Assessment Teams (ICATs), with EVA BC.

“I fundamentally believe that we are none of us free, until we are all free.”

Ninu Kang agreed with the speakers before her, echoing Brenda Bailey’s call for change saying, “Until we make Indigenous women’s safety a priority, none of us are going to be safe.”

Ending Violence Association of BC acknowledges that it is situated on the unceded traditional territories of the xʷməθkʷəy̓əm (Musqueam), Sḵwx̱wú7mesh (Squamish), and səlilwətaɬ (Tsleil-Waututh) Nations.

Created with love by Fernwood Creative

Work For EVA BC